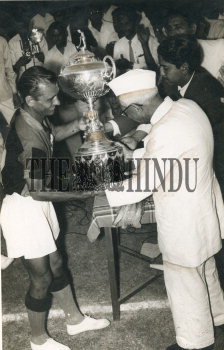 Caption : Bhopal's captain Najamuddin receiving the runner-up trophy from the Governor H.V. Pataskar. Bhopal lost by a solitary goal in the re-played final of the 27th National Hockey Championship held in Bhopal on March 23, 1962. (Published in Sport and Pastime on April 14, 1962) PHOTO: THE HINDU ARCHIVES