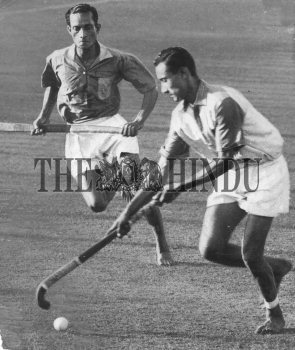 Caption : Maharashtra right-back Ganapathi stopping a ball as Vidarbha's right-winger Kesari rushes eagerly towards him in the National Hockey Championship held at the Corporation Stadium in Madras on March 04, 1963. Maharashtra won by two goals to one. (Published in The Hindu on March 05, 1963) PHOTO: THE HINDU ARCHIVES