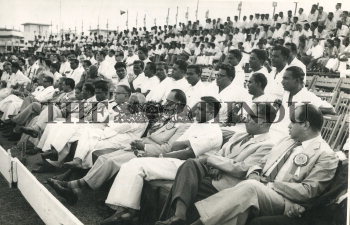 Caption : Photo shows M. Bhaktavatsalam, State Minister and President of the State Sports Council and other dignitaries watching the match between Madras and Orissa on the opening day of the National Hockey Championship held at the Corporation Stadium in Madras on March 02, 1963. PHOTO: THE HINDU ARCHIVES