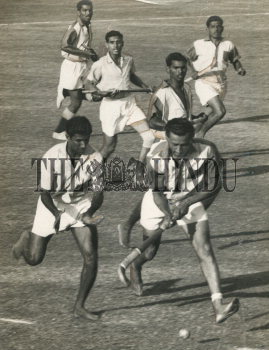 Caption : Ganapathy, the Maharashtrian defender and Satyanarayana (junior), right-winger of Hyderabad, both going for the ball in the National Hockey Championship held at the Corporation Stadium in Madras on March 04, 1963. Hyderabad won the match 1-0. (Published in The Hindu on March 05, 1963) PHOTO: THE HINDU ARCHIVES