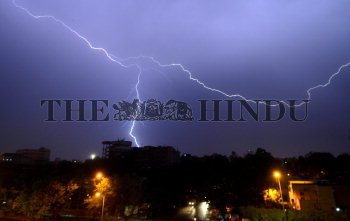 Caption : NEW DELHI, 01/06/2015: The city woke up to overcast skies and a gentle breeze that culminated in a thunderstorm after sunset. Light rain accompanied by wind and lightning cheered up Delhiites. The temperature came down with the maximum settling at 37 degrees Celsius, 3.6 degrees cooler than Sunday which recorded 40.6 degrees. The minimum temperature settled at 25.9 that was two degrees below normal, according to the Meteorological Department. Tuesday may see partly cloudy skies, along with the possibility of dust storms and thunderstorms, in New Delhi. Photo: Sushil Kumar Verma