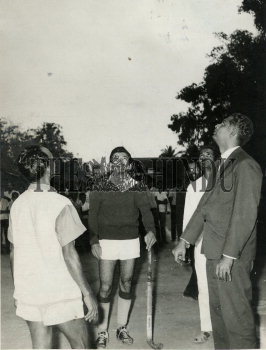 Caption : S.P. Ambrose (right) District Collector, spinning the coin to decide which side to hold the Dr. Durairaj cup (fourth Madras State Inter District hockey championship) during the first six months. Tirunelveli captain Dass (back to the camera) won the toss to have his district to keep the trophy for first six months, in Coimbatore on January 02, 1968. Munir Sait, Madras captain is also seen. (Pubd. in Sport and Pastime on January 27, 1968) PHOTO: THE HINDU ARCHIVES