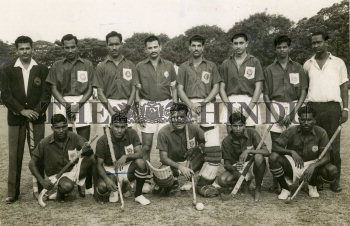 Caption : A group photograph of the State Bank of India Recreation Club, who retained the trophy in the Madras Cricket Club Hockey Tournament. They defeated I.C.F. by a solitary goal in Madras on July 17, 1965. (Published in Sport And Pastime on August 07, 1965) PHOTO: THE HINDU ARCHIVES