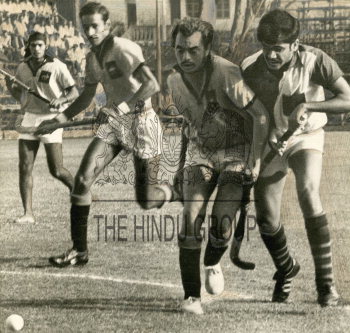 Caption : Ganesh (right), the Signals forward is baulked by Mahindra's full-back Alphonse as centre-half Johanas moves ahead for the ball In the first-leg final of the Murugappa gold cup hockey tournament at Egmore Stadium in Madras on October 24, 1973. The teams shared two goals in the match. (Published in The Hindu on October 25, 1973) PHOTO: THE HINDU ARCHIVES