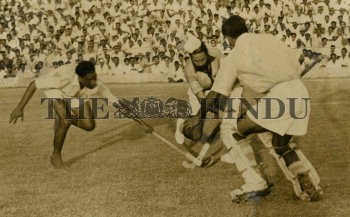 Caption : Satyanarayana, Hyderabad's captain and right-half, lunges forward to foil an attempt to score by Jaswant Singh, the Services centre-forward, during the National Hockey Championship held at Secunderabad on March 07, 1961. Services won the match by six goals to one. (Published in Sport and Pastime on April 08, 1961) PHOTO: THE HINDU ARCHIVES