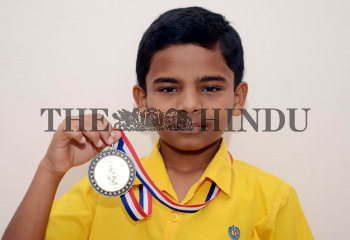 Caption : ERODE, TAMIL NADU, 30/05/2015: Pavansakthivel Vijayakumar of Erode, a student of Isha Home School, Coimbatore, with the prestigious medal he won at the ACADEMIC Games Leagues of America (AGLOA) 2015 national tournament in Orlando, USA. ACADEMIC Games is a set of games in mathematics, language arts, set theory, modern logic and social studies in which players attempt to score over their opponents with complex strategies. Photo: M. Govarthan