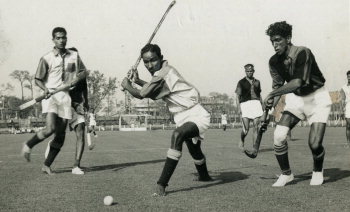 Caption : Ghukial (Maharashtra) about to take a hit against Bhopal in the National Hockey Championship held in Calcutta on February 12, 1960. After being a goal down, Maharashtra, without being particularly brilliant, recovered to beat Bhopal 2-1. (Published in Sport and Pastime on February 27, 1960) PHOTO: THE HINDU ARCHIVES