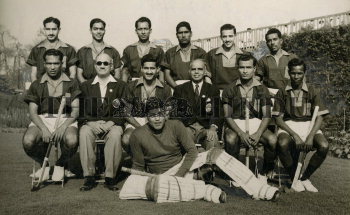 Caption : A group photo of the Bombay team. Bombay made their exit in the quarter-final getting beaten by the Services in the National Hockey Championship held at Calcutta on February 18, 1960. (Published in Sport and Pastime on February 27, 1960) PHOTO: THE HINDU ARCHIVES