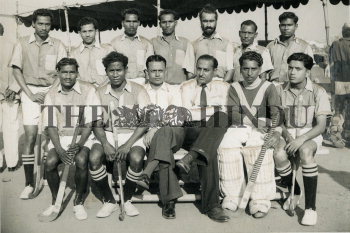 Caption : A group photograph of the Bihar hockey team. They were eliminated by Andhra Pradesh in the first round of the National Hockey Championship held in Calcutta. (Published in Sport and Pastime on February 27, 1960) PHOTO: THE HINDU ARCHIVES