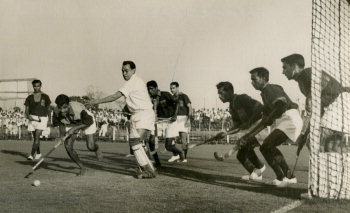 Caption : Photo shows a goalmouth scramble near the Bombay goal. Services player Deshmukh with the ball is seen trying to beat Bombay custodian Armstrong in the National Hockey Championship held in Calcutta on February 18, 1960. Services defeated Bombay by four goals to two. PHOTO: THE HINDU ARCHIVES