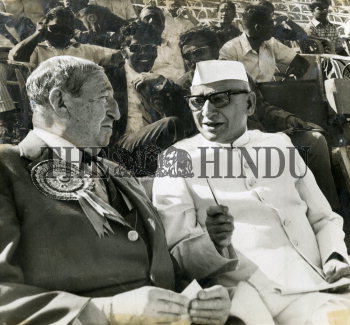 Caption : Rene G. Frank, President of International Hockey Federation (FIH) and the Tamil Nadu Governor, K.K. Shah, in conversation when the preliminaries of the International Hockey Tournament for the Rene Frank Trophy are being gone through at the Nehru Stadium in Madras on January 02, 1976. (Published in The Hindu on January 03, 1976) PHOTO: THE HINDU ARCHIVES