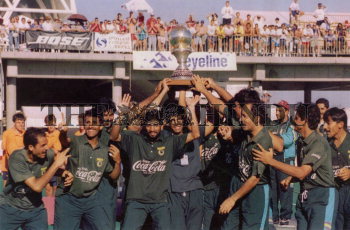 Caption : The jubilant Pakistan hockey team celebrates with the World Cup trophy in Sydney on December 04, 1994. Pakistan beat Holland 5-4 in the final of the World Cup hockey championship. (Pubd. in The Sportstar on December 17, 1994) PHOTO: THE HINDU ARCHIVES