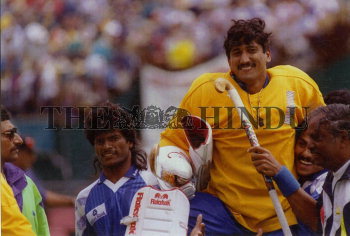 Caption : India's hero A.B. Subbiah, the goalie who helped India to get into the World Top six, shares a happy moment with coach Cedric D'Souza (extreme left), Dhanraj Pillay, manager Jesudanam and Shakeel Ahmed after their win over Argentina in a penalty shoot-out in the World Cup hockey championship in Sydney on December 02, 1994. (Pubd. in The Sportstar on December 17, 1994) PHOTO: THE HINDU ARCHIVES