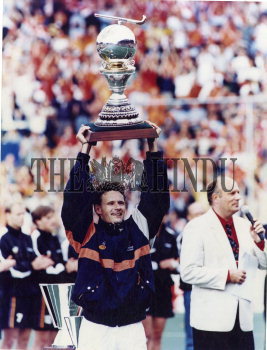 Caption : The Dutch captain Stephen Veen holds the World Cup hockey trophy aloft after bringing Spain to book in the summit clash in Utrecht on June 01, 1998. The Netherlands beat Spain 3-2 in the final. (Pubd. in The Sportstar on June 20, 1998) PHOTO: THE HINDU ARCHIVES