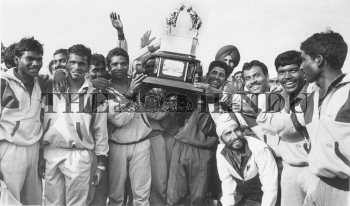 Caption : The Corps of Signals team celebrates with the trophy after winning the Gujarmal Modi Gold Cup hockey tournament, beating Northern Railway at the Sports Stadium in Meerut on February 24, 1991. PHOTO: THE HINDU ARCHIVES