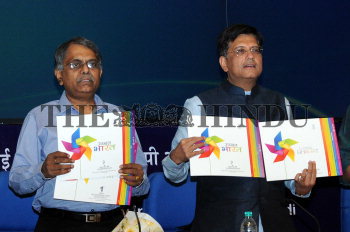 PIYUSH GOYAL - ON COMPLETION OF ONE YEAR OF THE ND

Caption : NEW DELHI, 27/05/2015: Piyush Goyal (right), Minister of State (IC) for Power, Coal and New and Renewable Energy along with Anil Swarup (left), Secretary Coal, releasing report card "Ujwal Bharat" First Year achivements and initiatives of Ministry of Power, Coal and New and Renewable Energy, during a Press Conference on completion of one year of the NDA Government, in New Delhi on May 26, 2015. Photo: Shanker Chakravarty