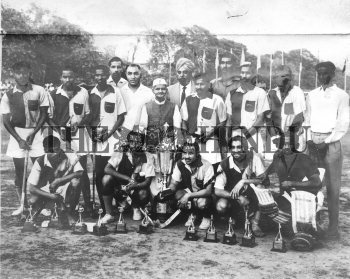 Caption : The victorious Railways hockey team members with the Union Minister pose with the trophy afater winning the game against Services in the finals of the National Hockey Championship for Rangaswami Cup in New Delhi. Photo shows: standing left to right: Rajinder, Erman, Nimal, Kishenlal (Coach) Lal Bahadur Shastri, Sudarshan Singh, Manager of the team, Mohinderlal (captain) Prithipal Singh, Alexander and Murugesh, seen in the back row are Sharma and Attaullah Khan in New Delhi. (Reference Published in Sport and Pastime on April 25, 1964) PHOTO: THE HINDU ARCHIVES