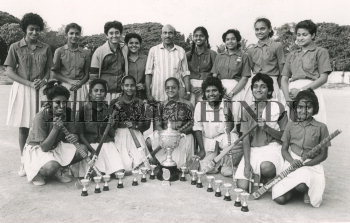 Caption : The jubilant Sacred Hearts girls team which won the KWHA inter-schools girls hockey title in Bangalore on August 03, 1989. (Published in The Hindu on August 04, 1989) PHOTO: THE HINDU ARCHIVES