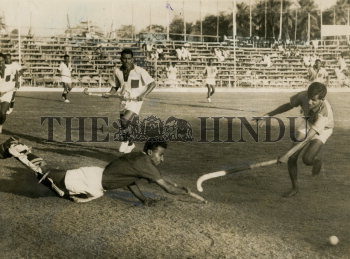 Caption : Mysore goal-keeper Christy has dived forward and put away a shot from Maharashtra's Bhorgay in the second replay in the National Hockey Championship for the Rangaswamy Cup in Madurai on March 11, 1967. (Published in Sport And Pastime on March 25, 1967) PHOTO: THE HINDU ARCHIVES