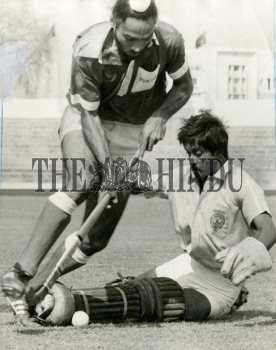 Caption : Olympian Surinder Singh Sodhi, who played a stellar role in Punjab's 4-0 win over Bengal in the quarter-final of the National Hockey Championship at Jullundur on March 10, 1981, tries to wrest the ball from the Bengal goalkeeper Mandapaka's pads. (Published in The Hindu on March 14, 1981) PHOTO: THE HINDU ARCHIVES