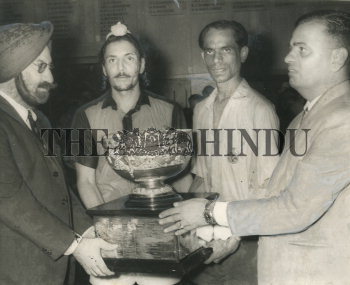 Caption : Major General Prakash Singh Grewal (left), G.O.C. Tamil Nadu, Mysore and Kerala area, presenting the Challenge Trophy to MURUGESH (second from right) and Major Singh, captains of Integral Coach Factory and Border Security Force, respectively, after the conclusion of the Madras Cricket Club invitation hockey tournament at Chepauk in Madras on July 12, 1970. ICF and BSF were declared joint winners as the second-leg final also ended in a draw. (Published in The Hindu on July 12, 1970) PHOTO: THE HINDU ARCHIVES