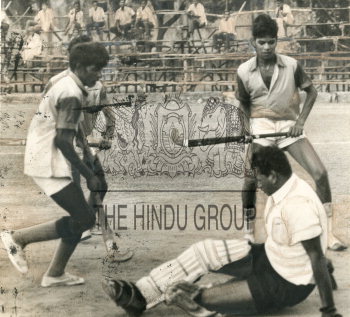 Caption : Vasu taps the ball, goalkeeper Idris is beaten and it is a goal for Nungambakkam Youngsters against State Bank of India (SBI) in the Murugappa Gold Cup hockey tournament held at Egmore Stadium in Madras on September 26, 1972. The match ended in a 1-1 draw. (Published in The Hindu on September 27, 1972) PHOTO: THE HINDU ARCHIVES