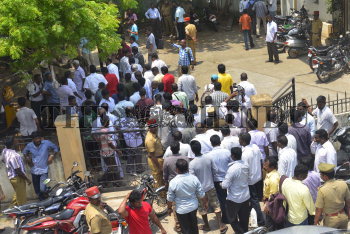 Caption : PUDUCHERRY, 22/05/2015: Supporters of AINRC MLA and Government Whip G. Nehru gather on the premises of CID Police Station at Orleanpet in Puducherry on May 22, 2015. Tension prevailed after the party cadre chipped away a portion of a compound wall in the premises that blocked an irrigation canal. Photo: S.S. Kumar