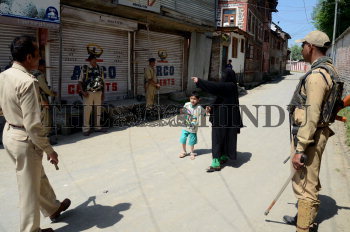 Caption : SRINAGAR, JAMMU AND KASHMIR, 21/05/2015: A woman pleads with a Police officer during the implementation of restrictions in Srinagar. Authorities imposed restrictions in the old Srinagar city to foil 'Eidgah march' of moderate separatist alliance to commemorate the death anniversaries of late religious leader Mirwaiz Mohammad Farooq and separatist leader Abdul Gani Lone. Both leaders were shot down on the same day 21 May in 1990 and in 2002 respectively. Shops, educational institutions and business establishments remained closed in Srinagar and other towns. Photo: Nissar Ahmad