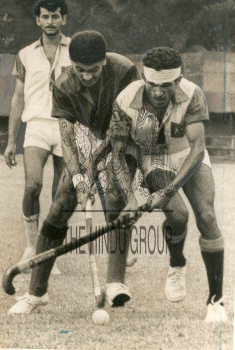 Caption : MEG's centre-forward Kariappa and ASC's Chengappa (right) in a tackling duel in the second round of the Murugappa Gold Cup Hockey Tournament match between Madras Engineering Group (M.E.G) Bangalore and Army Supplies Corps., (A.S.C.)Bangalore at Egmore Stadium on October 10, 1973. The match ended in a goal-less draw. (Published in The Hindu on October 11, 1973) PHOTO: THE HINDU ARCHIVES