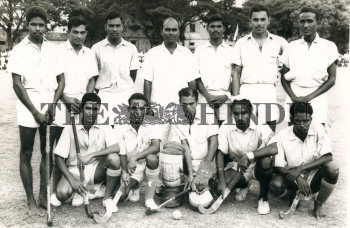 Caption : Group photo of the Hyderabad hockey team. Bombay XI claimed the Invitation Cup for the Madras Hockey Association tournament when it defeated Hyderabad XI by a comfortable margin of two goals to nil at the Egmore Stadium in Madras on July 07, 1968. PHOTO: THE HINDU ARCHIVES