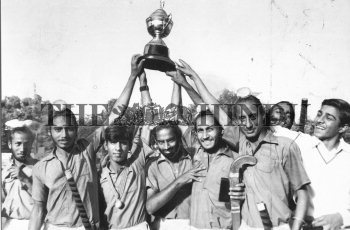 Caption : Jubilant boys of the Border Security Force Academy hold aloft the Gold Cup after their victory in the Nehru junior hockey tournament at Delhi on November 29, 1974. BSF Academy defeated NIS (rural) Delhi, in the final. (Published in The Hindu on November 30, 1974) PHOTO: THE HINDU ARCHIVES