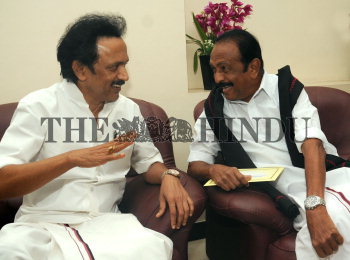 Caption : CHENNAI, TAMIL NADU, 17/05/2015: DMK Treasurer M.K. Stalin having a word with MDMK General Secretary Vaiko after inviting his brother's son and actor, Arulnidhi's wedding at Anna Nagar in Chennai on May 17, 2015. Photo: B. Jothi Ramalingam