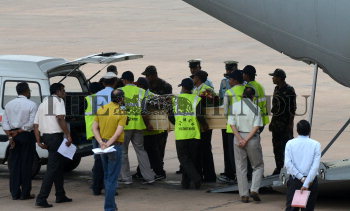 Caption : NEW DELHI, 15/05/2015:: The body of an Indian killed in a Taliban attack on a Kabul hotel, being brought to the Palam Airforce Station, in New Delhi on Friday, May 15, 2015. Four Indians — two auditors, a project consultant and an NGO worker — were among the 14 killed in Wednesday’s attack. Photo: Sandeep Saxena