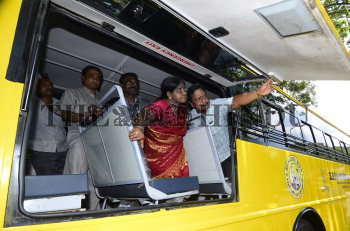 Caption : CHENNAI, TAMIL NADU, 15/05/2015: Following orders by the district collector to inspect all vehicles that are being used to transport school students, a drive was conducted by the Anna Nagar RTO in Chennai on May 15, 2015. Over 100 vehicles are attached to the Chennai North West RTO. Fifty-two of them have been inspected so far. The features of vehicles that were checked for safety include the platform, footboard, passenger seats, emergency exit, fire extinguisher, first-aid box and bag rack. The mechanical condition of the vehicle was also inspected. Installation of the speed governor was checked too. It allows the vehicles to move at a speed of 40 kph within the city limits and 50 kph in mofussil areas. The vehicles that fell short of the requirements were issued a CFX — which suspended their fitness certificates. The owners have to set things right and bring their vehicles back for re-INSPECTION. Photo: R. Ravindran