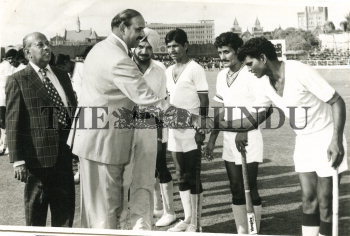 Caption : Army Service Corps (Jullundur) team which won the finals of the Aga Khan Hockey tournament against Northern Railways by 4-0 in Bombay on May 31, 1980 being introduced to the Chief of the Army Staff, Gen. O.P. Malhotra, who was the chief guest. PHOTO: THE HINDU ARCHIVES