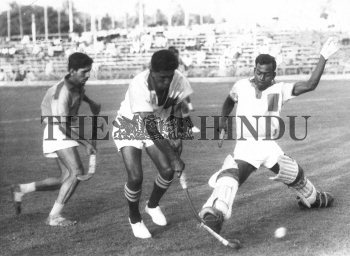 Caption : In saving a shot from Susairaj (Mysore), Maharashtra's goal-keeper Xavier stamps his foot on the stick which bends like a bow in the National hockey championship in Madurai on March 09, 1967. (Pubd. in Sport and Pastime on March 25, 1967) PHOTO: THE HINDU ARCHIVES