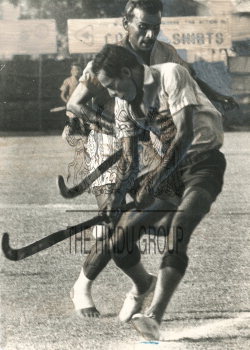 Caption : Thangaraj, right-winger of Madras Engineering Group, Bangalore, being tackled by Integral Coach Factory's full-back Marian in the first leg of the final of the Murugappa gold cup hockey tournament at the Egmore Stadium in Madras on September 18, 1971. The match ended in a 1-1 draw. (Published in The Hindu on September 19, 1971) PHOTO: THE HINDU ARCHIVES