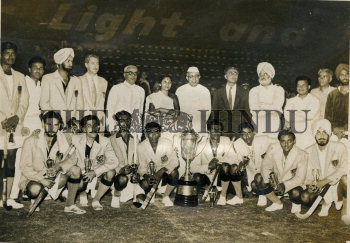 Caption : The Railways retained their title defeating Bombay in the final of the National hockey tournament, for the Rangaswamy Cup by one goal to nil at the floodlit hockey stadium at Bombay on April 20, 1958. (Published in The Hindu on April 22, 1958) PHOTO: THE HINDU ARCHIVES