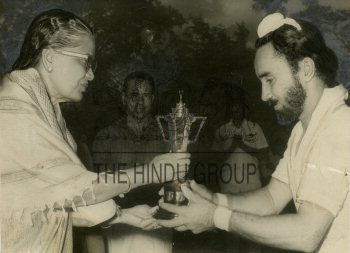 Caption : Mrs. A.M.M. Arunachalam, wife of the Managing Director, Tube Investments of India Ltd., presenting the Gold Cup to Raminder Singh, captain of the Corps of Signals, Jullundur, which won the Murugappa Gold Cup hockey tournament beating Hindustan Aeronautics, Bangalore, 2-1 at the Egmore Stadium in Madras on April 12, 1970. (Published in The Hindu on April 13, 1970) PHOTO: THE HINDU ARCHIVES