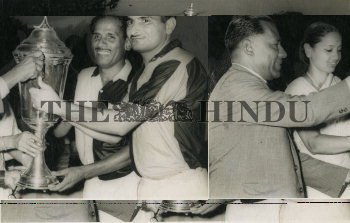 Caption : At the end of a gruelling, goal-less drawn final of the National hockey championship at Madurai, on March 24, 1967, Railways and Madras were declared joint holders of the Rangaswami Cup. Badiuddin (third from left) and Mohinder Lal (extreme right), skippers respectively of Madras and Railways, receiving the trophy from Mrs. Lalitha Sivasamban, wife of Mr. T. K. Sivasamban, President of the Madurai District Hockey Association. (Published in The Hindu on March 26, 1967) PHOTO: THE HINDU ARCHIVES