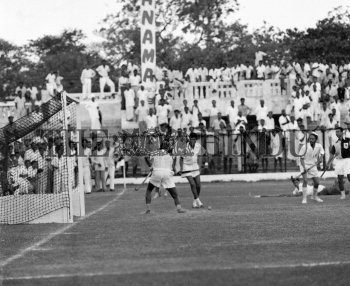 Caption : Picture shows Bengal goal-keeper Thappa, who fell down, watches as a Bengal player trying to hit the ball away during the replayed match between Bengal and Madras in the National Hockey Championship for the Rangaswami Cup, at the Corporation Stadium in Madras on March 11, 1963. PHOTO: THE HINDU ARCHIVES