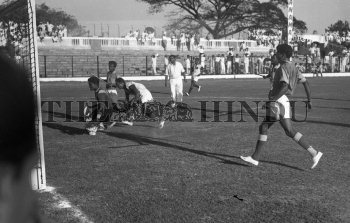 Caption : Bihar goal-keeper Mangal seen in action during the match against Mysore in the National Hockey Championship for the Rangaswami Cup at the Corporation Stadium in Madras on March 06, 1963. PHOTO: THE HINDU ARCHIVES