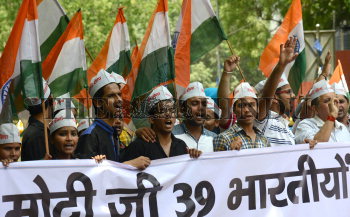 Caption : NEW DELHI, 10/05/2015: Where are they? Members of Aam Aadmi Sena staging a protest against the Central Government demanding to know the status of 39 Indian construction workers missing in Iraq believed to have been kidnapped by ISIS militants, at Jantar Mantar, in New Delhi on Sunday, May 10, 2015 Photo: V. Sudershan