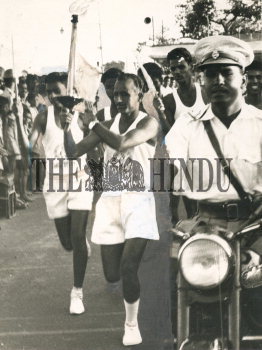 Caption : R. Sambandam, former Mayor of Madras, carrying the torch of the National Games to be held in New Delhi, is in the first lap from Marmalong Bridge to Y.M.C.A. in Madras on January 12, 1968. (Published in The Hindu on January 13, 1968) PHOTO: THE HINDU ARCHIVES