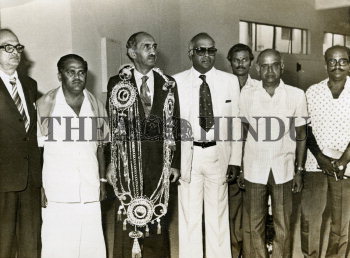 Caption : Air Marshal Nur Khan, President, Pakistan Hockey Federation, seen with his Indian counterpart, Mr. M. A. M. Ramaswamy, on arrival in Madras on January 12, 1978. The PHF President is in City to work out the details of the four Test series between the two countries. PHOTO: THE HINDU ARCHIVES