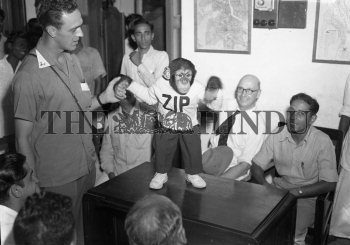 Caption : "ZIPPY", the Hollywood and Television Star Chimpanzee who is to act In a picture to be produced by the Gemini Studios, on his arrival from the USA. The trainer who accompanied 'Zippy' visits The Hindu Office on June 23, 1955. PHOTO: THE HINDU ARCHIVES