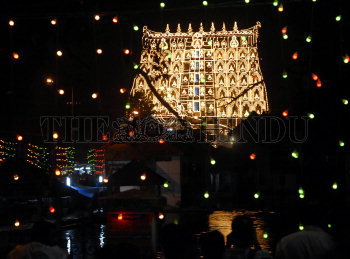 Caption : THIRUVANANTHAPURAM:13/01/2008:The Eastern Gopuram of the Sri Padmanabha Swamy temple in Thiruvananthapuram is bathed in light on the eve of the Lakshadeepam, the spectacle marking the culmination of the Murajapam ceremony held once every six years. The lights were switched on on Sunday night as a rehearsal. Photo:S. Mahinsha.