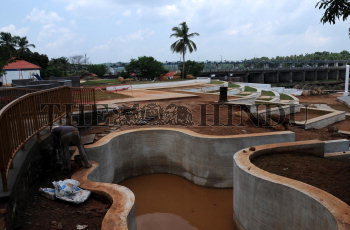 Caption : PALAKKAD, KERALA, 05/05/2015: Though more than a fortnight has gone since the mega function in which Chief Minister Oommen Chandy opened the Velliyamkallu Heritage Park on the banks of River Bharathapuzha in Thrithala in Palakkad district for visiting tourists, the park continues to remain out of bound for tourists as the construction works are yet to be completed. It was inaugurated much ahead of the completion of works only to get the chief Minister as Chief Guest. Photo: K. K. Mustafah