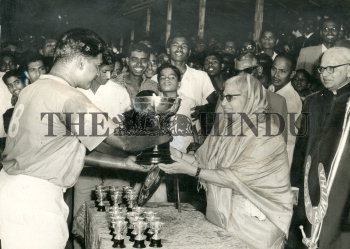 Caption : Manuel, captain of the M.E.G. team, which won the Maharaja's Gold Cup hockey tournament, receiving the trophy from Mrs. Pathak, wife of the Mysore Governor on September 17, 1967 at Bangalore. M.E.G. defeated Hindustan Aircraft in the final by a solitary goal. (Pubd. in The Hindu on September 19, 1967) PHOTO: THE HINDU ARCHIVES