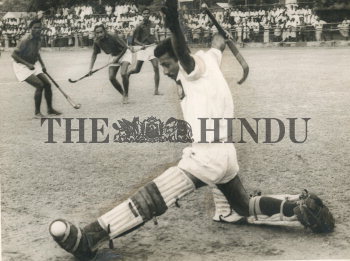 Caption : Munir Sait, State Bank of India Recreation Club's goal-keeper, gave a great display against Punjab Police in the M.C.C. hockey tournament at Chepauk in Madras on July 22, 1966. He is here footing away a hit from Tarsen Singh, making one of his many saves of the evening, as his team-mates Natarajan and Lourduswamy, look on. State Bank won the match by one goal to nil. (Published in The Hindu on July 23, 1966 ) PHOTO: THE HINDU ARCHIVES